Amanda Figueras discovered Islam and has written about being a woman, European and a Muslim 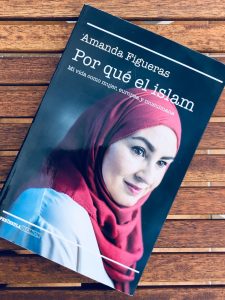 Amanda Figueras has published a book titled ‘Why Islam: My life as a woman, European and Muslim’ that talks about her journey into Islam.

MADRID: This might not be her first Ramadan, but for Spanish Muslim Amanda Figueras it still feels new.

She became a Muslim a few years ago and for her Ramadan is always a very special month.

“At the beginning, when I used to practice Islam alone with no one in my family to share it with, I used to go to the mosque and break the fast there and pray taraweeh. I always loved how I was welcomed by my sisters in Islam.”

Now it is different. Since her marriage a few years ago she shares her faith with her Egyptian husband and a three-year-old son. “We have done some decorations at home we try to show our son the spirit of Ramadan.”

Amanda, who is a journalist and a writer, doesn’t consider herself a Muslim convert.

“I did not change from one religion to another. I was not a believer, simply I did not have any faith. This makes my personal awakening fascinating because I found that there is God and that Islam was what I wanted for my life,” she said.

“I encounter Islam because as a journalist I had to write about Muslim people, and I realized that I had no idea at all. I started to read non-stop and I fell in love with our Prophet Muhammad (Peace Be Upon Him) after knowing about his generous character and genuine humbleness.”

“Then, reading the Holy Qur’an, especially those ayas emphasizing the perfection of nature, I started to find and feel Allah. The simplest things were those which opened my eyes to Islam.”

The decision to become a Muslim took her family by surprise, she said.

“For my family it was not easy, they reacted in the normal way: with fear. For me it was painful to see how at the same time that I was finding happiness, tranquility, and calmness, they were feeling bad about it. But Islam was giving me only good things.

“We do not talk a lot about this anyway, and sadly I have lost both of my parents.

Nevertheless, I am happy I have a little family and a husband who is always supportive of my projects and of course of my curiosity to know more about our religion.’

She admits the beginning of her journey into Islam was also confusing for her.

“The main barrier that I encountered when I started to feel that I really liked Islam was that of my own prejudices and some misconceptions. However, I discovered that Islam is beautiful, that it is all about trust, generosity and forgiveness,” she said.

Amanda is passionate about fostering dialogue and building bridges between different peoples, as well as fighting Islamophobia and hate speech.

She started working 5 years ago as a project and communications manager at Foro Abraham for Interfaith and Intercultural Dialogue.

“It is a non-profit civil society organization based in Spain that works to promote understanding through what we call ‘interreligious dialogue and interfaith action.’ I started to be interested in this topic after being selected for the fellowship program of the United Nations’ Alliance of Civilizations.

“At Foro Abraham we do activities to connect people of different backgrounds and it is an amazing experience. Before the COVID-19 crisis we were working on a cycle of dialogue sessions with refugees and migrants in Europe, in collaboration with the International Dialogue Center — Kaiciid (King Abdullah Bin Abdulaziz International Centre for Interreligious and Intercultural Dialogue) — as I am a Kaiciid European Fellow 2020, but now our activities are postponed due to the pandemic.”

Amanda says she faces some difficulties within Spanish society as a Spanish Muslim.

She insists that Spanish Muslims have the same rights as any other citizens: “We are a small community but are getting bigger and stronger. However, we are mainly considered as only ‘Muslims’, we are only given the microphone when it comes to talking about ‘Muslim issues,’ mainly about the hijab,” she said.

“We are not considered full citizens with valuable opinions about any other topic. It is harder for us to reach certain work positions and we lose a lot of time justifying ourselves like: ‘Yes, I am a Muslim and I am a normal person and I can work and achieve the same as any other person.’

Amanda has published a book titled ‘Why Islam: My life as a woman, European and Muslim’ that talks about her journey into Islam.

“It is journey I started in the aftermath of the 2004 terrorist attacks in Madrid. At that time, I was a journalist at El Mundo newspaper, and I had been asked to investigate the consequences among the Muslim community in Spain.

“I realized that I knew little about Islam and Muslims in general. In my book, while I describe my experience as a new Muslim, I explain basic but important things about my faith to the reader. I also address some of the common misunderstandings surrounding women.”

Amanda has a message for Muslim Spanish women like herself.

“It is the time that we women take more responsibility when it comes to research and to sharing knowledge.”