We, as Muslims, have to purify ourselves before offering prayer. Therefore, a Muslim is required to follow certain purification procedure known as wudu’ (ablution). The Prophet (peace be upon him) said, “Allah does not accept prayer of anyone of you if he does hadath (passes wind) till he performs the ablution (anew). (Al-Bukhari) 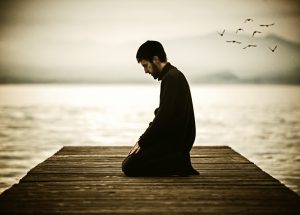 Point the index finger straight in the direction of the qiblah and move it through the recitation of the Tashahhud.

But before ablution, you have to perform Istinja’ whenever one passes impurity from any of passages (front & back). One can use either stone (tissue in modern times) or water. To perform it with water is preferred.  The best is to combine both water and tissue, first by wiping with the tissue and then washing.

The female would always wipe first from the front (part closest to the vagina) wiping towards the back, and with the second stone (tissue) wiping from the back to the front and so on.

Then, one should wash both his/her hands in case of any impurity that could be on the skin.

After that, one should pour water over the anus area and rub the area using the inner part of one’s fingers. One should continue until all the impurity and smell is removed. (Nur Al-Idhah, pp. 27-30)

This completes the first step of purification that precedes the prayer. Now, you are ready to perform ablution

Wudu’ or ablution means using clean and cleansing water on certain parts of the body.

How to Perform Ablution

3- Wash both hands up to the wrist three times and make sure that water has reached between fingers.

4- Take a handful of water; rinse your mouth three times and spit it out every time.

5- Inhale water into your nostrils and then exhale it, three times.

6- Wash your face three times from one ear to the other, and from the forehead to the chin.

7- Wash both your arms up to the elbows, starting with the right and then the left three times.

8- Wipe over head with your wet palms from the top of the forehead to the back of the head.

9- Wash the front and back of your ears by using your index and thumb fingers.

10- Finally, wash both feet to the ankles starting from the right, making sure that water has reached between the toes and all other parts of the feet.

Note: You do not have to repeat ablution unless it is nullified.

Note: Hadath refers to what emanates from the body of wind, urine, stool, seminal fluids, menstrual blood or post-natal bleeding.

How to Offer Prayer in Islam

There are five obligatory prayers that are offered at certain times during the day and the night. They are called Fajr (Dawn) prayer, Zhuhr (Noon) Prayer, `Asr (Afternoon) Prayer, Maghrib (Sunset) Prayer, and `Ishaa’ (Night) Prayer. These five daily prayers become obligatory once a person converts to Islam.

After performing ablution, make sure that you are covering your `Awrah (what is between navel and knees for male, and the whole body including the head except the face and hands for female). You have to make sure that your clothes and the place of prayer are free from impurities.

Now You Are Ready to Pray;

Now, you complete one rak`ah (unit of prayer). Stand up while saying “Allahu Akbar” and perform another rak`ah. Do it in the same manner as you did the first one, but without reciting the opening supplication.

“All respect, worship and all glory is due to Allah alone. Peace be upon you, O Prophet, and the Mercy and Blessings of Allah be upon you. Peace be on us and on those who are the righteous servants of Allah. I testify that there is no one worthy of worship except Allah, and I testify that Muhammad is His Servant and Messenger”.

Times and Number of Rak`ahs of Each Prayer