The matter of intercession is of great importance because it is part of the Islamic Faith or ‘Aqidah. To reach a proper understanding of this matter, one must first study all the verses of the Gracious Quran and the authentic Hadiths that speak about it. Adopting an opinion according to a specific text without taking into consideration the other texts may lead to misunderstanding.

Al-Shafa’ah (intercession) is an Arabic term taken from al-Shaf’ which means two, even or couple. Two antonyms of al-Shaf’ (couple) are single and odd.  It may be defined as speaking to or asking someone to bring about benefits or to save or protect another one from harm. If the intercession is accepted, this becomes a sign of the high status the intercessor enjoys in the eye of the person who accepts it.

Scanning the verses of the gracious Quran, one finds out that there are some verses that negate al-Shafa’ah (intercession) while there are other verses that confirm it. Of course, there is no problem here as scholars provide some ways of reconciliation between the two apparently contradictory kinds of verses. 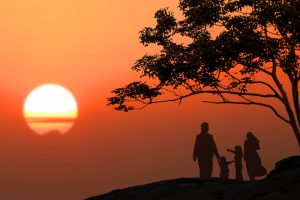 Intercession may be defined as speaking to or asking someone to bring about benefits or to save or protect another one from harm.

Some verses which absolutely negate al-Shafa’ah(intercession):

There are some verses that deny intercession. It will be sufficient to quote a few of them.

1. Allah says,“Then be ever fearful of a Day (Hereafter) when no soul shall indemnify any other soul against anything (from God). Nor shall any intercession be accepted from it (for its salvation). Nor shall any compensation be taken from it (in atonement for its sins). Nor shall they (who have disbelieved) ever be helped (against God’s Judgment).” (Quran 2:48)

2.“O you who believe! Spend (charitably) out of what We have provided you, before there comes a Day (Hereafter) in which there shall be no (gainful) trade nor (availing) friendship, nor intercession. Then (as to) the disbelievers (who embrace false gods) _ it is they who are the wrongdoers, (godless in heart).” (Quran 2:254)

3.“Hence, forewarn with (this Quran all) those who fear being gathered before their Lord (that) they have no patron apart from Him, nor any intercessor, so that they may become God-fearing.” (Quran 6:51)

As for intercession to take place, there are some conditions regarding all the parties involved. The above mentioned verses can be understood to refer to the people who do not meet the requirements necessary for them to intercede on behalf of others or have others intercede on their behalf.

Some other verses which confirm intercession:

On the other hand, the following verses mention some prerequisites so that the intercession can be accepted. Allah’s permission and pleasure are but a few examples. A few examples of these verses will also be sufficient.

2. “So all those that they call upon apart from Him hold no (power of) intercession. Excepted are those (of God’s servants whom He permits to intercede, and) who bear witness to the truth and they know well “from Him for whom it may be made).” (Quran 43:86)

3. “For how many an angel is there in the heavens whose intercession is of no avail (to anyone) in anything until God grants permission to whomever He so wills and is pleased with.” (Quran 53:26)

Ways to reconcile between the two types of verses:

1. The matter of intercession is entirely in the Hands of Allah (Glory be to Him). Allah says, “(Then) say (to them): Intercession is altogether for God (alone to permit)!” (Quran 39:44)

2. There is no intercession in favor of the disbelievers. Allah says, “So forewarn them of the Impending Day when hearts go up into choking throats – (when) there shall be no intimate friend for the wrongdoers, nor any intercessor to be heeded.” (Quran 40:18)

The Prophet (ﷺ) said, Abraham will meet his father (on the Day of Resurrection) and will say, ‘O my Lord You promised me that You would not let me in disgrace on the Day when people will be resurrected.’ Allah will say, ‘I have forbidden Paradise for the disbelievers.” (Al-Bukhari and Muslim)

`Abbas bin `Abdul Muttalib said, “O Allah’s Messenger (ﷺ)! Did you benefit Abu Talib with anything as he used to protect and take care of you, and used to become angry for you?” The Prophet (ﷺ) said, “Yes, he is in a shallow place of Fire. But for me he would have been in the lowest part of the Fire. (Al-Bukhari and Muslim)

3. The intercessor can intercede only by Allah’s permission. Allah says, “Who is it that shall intercede with Him, except by His permission?” (Quran 2:255)

5. Idols, the sun, the moon and all the other things that were worshipped apart from Allah do not intercede with Allah on behalf of their worshippers. Allah says,

“Thus (all) those whom you call upon apart from Him hold no authority even over (so much as) a seed coat. If you call them, they do not hear your call. And were they to hear, they could not answer you. Thus, on the Day of Resurrection, they will utterly disavow your association of them (as gods) with God. And there is none to tell you (of the events of that Day) like the One who is all-aware. (Quran 35:14)