The Udhiyah (the sacrificial animal) is a grazing animal from among camels, cows, buffaloes, sheep and goats that is sacrificed on Eid al-Ad-ha (festival of sacrifice) and the following three days (the days of Tashriq) for the sake of drawing near to Allah.

The proofs from the Gracious Quran, the Sunnah and the Consensus denote that the udhiyah is one of the rites of Islam. Allah says,

For each (faith)-community We have appointed (sacred) rites, so that they may mention the name of God over any grazing beasts (that they sacrifice as charitable-offerings, from whatever) He has provided them. (Quran 22:34)

Anas reported that Allah’s Messenger (ﷺ) sacrificed with his own hands two horned rams which were white with black markings reciting the name of Allah and glorifying Him (saying Allah-u-Akbar). He placed his foot on their sides (while sacrificing). (Al-Bukhari and Muslim)

Muslim scholars have reached a consensus that the Udhiyah is one of the legal rites of Islam. 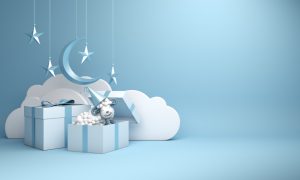 The Udhiyah (the sacrificial animal) is a grazing animal from among camels, cows, buffaloes, sheep and goats that is sacrificed on Eid al-Ad-ha (festival of sacrifice) and the following three days (the days of Tashriq) for the sake of drawing near to Allah.

So pray to your Lord, and sacrifice (charitable-offerings to Him alone). (Quran 108:2)

The prerequisites for offering a sacrificial animal:

Sincerity is a prerequisite for the acceptance of every act of worship. So, the person who intends to offer an udhiyah (a sacrificial animal) should do this only for the sake of Allah. Allah says,

Never shall (any part of) their flesh nor their blood reach God. But rather, it is (your devotion inspired by the) fear of God in you that reaches Him. Therefore has He subjugated them to you, that you shall extol God, (the Creator) for (the blessing of faith to) which He has guided you. So give glad tidings to those who excel in (doing) good. (Quran 22:37)

2. The sacrificial animal must be one of the following grazing animals:

A. the camel and the she-camel

B. the bull, the cow and the buffalo

C. the sheep (the ram and the ewe)

D. the goat and the she-goat

For each (faith)-community We have appointed (sacred) rites, so that they may mention the name of God over any grazing beasts (that they sacrifice as charitable-offerings, from whatever) He has provided them. (Quran 22:34)

3. The sacrificial animal must reach the legally specified age.

“Sacrifice only a full-grown animal (musinnah) unless it is difficult for you, in which case you should sacrifice a jadha’ah(six to ten month old) sheep.” (Muslim)

Scholars interpret an adult sacrificial animal (musinnah) as thaniyyah whose milk teeth (the medial incisors) have fallen out and are replaced by permanent teeth. Unlike the thaniyyah, the jadha’ah is a young animal.  For grazing beasts to be described as thaniyyah, they have to reach a specific age that differs according to the different kinds of beasts.

A. The thaniyyah from camels is about five years old.

B. The thaniyyah from cows or buffaloes is about two years old.

C. The thaniyyah from goats or sheep is about one year old.

In case the person who intends to sacrifice does not find a grazing beast that meets this requirement, he or she is allowed to sacrifice a jadha’ah (a six month old) lamb.)

4. The sacrificial animal must be free from all physical defects that make it unsatisfactory sacrifice for offering.

Al-Baraa’ ibn ‘Azib (may Allah be pleased with him) narrated that the Prophet (peace and blessings of Allah be upon him) said,

“Four (types of animals) should be avoided in sacrifice: A One-eyed animal which has obviously lost the sight of one eye, a sick animal which is obviously sick, a lame animal which obviously limps and an animal with a broken leg with no marrow.” (Abu Dawud and Al-Nasa’i)

A more serious defect than those mentioned above is, a fortiori, a one that makes the sacrificial animal unacceptable as sacrifice.

5. Slaughtering the animal designated for sacrifice must take place within the legally specified time.

People can start slaughtering their animals after performing the Eid al-Ad-ha prayer on the 10th to the sunset on the 13th of Dhul-Hijjah.

On the day of Nahr (sacrifice) Allah’s Messenger (ﷺ) delivered the Khutba (speech) after the ‘Eid prayer and said, “Anyone who prayed like us and slaughtered the sacrifice like we did then he acted according to our (Nusuk) tradition of sacrificing, and whoever slaughtered the sacrifice before the prayer, then that was just mutton (i.e. not sacrifice).” Abu Burda bin Niyar stood up and said, “O Allah’s Messenger (ﷺ)! By Allah, I slaughtered my sacrifice before I offered the ‘Eid prayer and thought that today was the day of eating and drinking (nonalcoholic drinks) and so I made haste (in slaughtering) and ate and also fed my family and neighbors.” Allah’s Messenger (ﷺ) said, “That was just mutton (not a sacrifice).” Then Abu Burda said, “I have a young she-goat and no doubt, it is better than two sheep. Will that be sufficient as a sacrifice for me?” The Prophet (ﷺ) replied, “Yes. But it will not be sufficient for anyone else (as a sacrifice), after you.” (Al-Bukhari)

1. On the sight of the new moon of Dhul-Hijjah, it is recommended for the people who intend to offer a sacrifice not to have their hair cut or their nails trimmed.

“When is the beginning of Dhul-Hijjah and anyone of you intends to offer a sacrificial animal, he should not get his hair cut or nails trimmed until he offers it. (Muslim)

What is the smallest number of sacrificial animals that can be offered?

Jabir (RAA) narrated, ‘In the year of Hudaibiyah (Reconciliation), we sacrificed a camel for each seven people along with Allah’s Messenger (ﷺ), and also a cow for seven. (Muslim)

How can the sacrificial animal be distributed?

It is recommended to eat, give as a present and give to charity from the udhiyah. Allah says,

…they may observe (many) benefits for themselves and mention (much) the name of God during the known days (of Hajj-Pilgrimage) over what He has provided them of grazing beasts (to sacrifice). So eat of them and feed the afflicted (ones), the (indigent) poor. (Quran 22:28)

… (you may butcher their meat to )eat of them (yourselves)- and to feed (both) the self-restrained needy and the suppliant poor. (Quran 22:36)

Some scholars prefer the meat to be divided into three: one-third for the owner, one-third for charity and the last third to be given as gifts.