The recommended acts of worship are those acts whose performance is rewarded by Allah. However, there is no punishment if they are not performed.

The recommended acts of fasting:

Although there are many recommended acts concerning fasting, we will discuss here those ones related to fiqh. These are as follows: 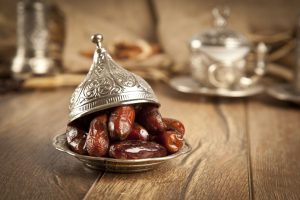 When one feels sure it is sunset and the Maghrib (Sunset Prayer) announces, it is recommended for one to hasten to break the fast in both obligatory and supererogatory fasting.

Sahl bin Sa’d (RAA) narrated That the Messenger of Allah (ﷺ) said: “People will always be fine (on the right path, or following the Sunnah) as long as they hasten to break their fast.” (Al-Bukhari and Muslim)

After that, one can have the main meal of the day called iftar (the breaking of the fast).

3. Supplicating Allah when one breaks the fast

Supplication (du’aa) to Allah is always recommended. However, there are certain times on which du’aa is far more recommended. One of these times for the fasting person is at sunset. In addition, du’aa at this time is never rejected as long as the etiquette and prerequisites for making du’aa are observed.

Ibn Umar said that the Prophet (ﷺ) said when he broke his fast: Thirst has gone, the arteries are moist, and the reward is sure, if Allah wills. (Abu Dawud)

Abu Hurairah narrated that the Messenger of Allah (ﷺ) said: “There are three whose supplication is not rejected: The fasting person when he breaks his fast, the just leader, and the supplication of the oppressed person; Allah raises it up above the clouds and opens the gates of heaven to it. And the Lord says: ‘By My might, I shall surely aid you, even if it should be after a while.” (Al-Tirmidhi and Ibn Majah)

4. Having Suhur direclty before dawn

In addition to the blessing in it, suhur gives the person observing fasting the energy to better perform the other acts of worship. It is recommended to eat suhur and to finish eating it 10 or 15 minutes before the time of dawn.

Anas (May Allah be pleased with him) reported: The Messenger of Allah (ﷺ) said, “Eat Suhur (predawn meal). Surely, there is a blessing in Suhur.” [Al-Bukhari and Muslim].

The true meaning of worship is achieved through the true submission and obedience to Allah’s commands. This is very obvious here, but how?؟

When it is obligatory to fast, Muslims hasten to obey Allah through observing it. Also, when it is forbidden to fast, they do not. This article highlights those days on which fasting is prohibited. 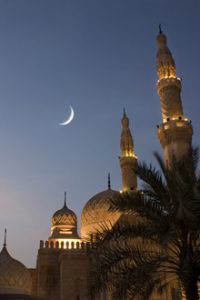 When it is obligatory to fast, Muslims hasten to obey Allah through observing it. Also, when it is forbidden to fast, they do not.

What are the days on which fasting is prohibited?

This festival marks the end of Ramadan and based on proofs from the Sunnah, it lasts only for the first day of Shawwal, the 10th month in the lunar calendar. Traditionally, it can last for up to three days.

This is the Muslims’ second festival that marks the end of the most important pillar of the pilgrimage to Makka (mecca), namely, standing on Arafat. It lasts only for the 10th day of Dhul-Hijjah, the 12th month in the lunar calendar. Usually, it can last for up to four days. The three days that follow the first day of the festival will be discussed below.

Scholars unanimously agree on the prohibition of fasting on those two days, that is, Eid al-Fitr and Eid al-Ad-ha. Moreover, celebrating on these two days is an act of worship as long as acts of disobedience are avoided. This is supported by the proof from the Sunnah:

Abu Sa’id Al-Khudri (RAA) narrated. ‘The Messenger of Allah (ﷺ) has prohibited fasting on two days; the Day of Fitr (breaking the fast of Ramadan) and on the Day of sacrifice (‘Eid al-Ad-ha).’ (Al-Bukhari and Muslim)

These are the 11th, 12th and 13th days of Dhul-Hijjah. It is also prohibited to fast on these days except for the pilgrim who cannot offer a sacrifice.

‘A’isha and lbn ‘Umar (RAA) narrated, ‘Nobody was allowed to fast on the days of Tashriq except for those, who could not afford the Hadi (sacrifice).’ (Al-Bukhari)

“The days of Tashriq (the three days following ‘Idul Ad-ha, i.e. 11th , 12th and 13th of Dhul Hijjah) are days of eating, drinking and remembering (dhikr) of Allah, the Most Great and Glorious.” (Sahih Muslim)

This is the 30th day of Sha’ban, the 8th month in the lunar calendar.

On the 29th night of Sha’ban, it is sometimes impossible or to see the new moon. This makes people doubt the beginning of Ramadan and whether the following day is the 30th of Sha’ban or the first day of Ramadan. That’s why it is called “the day of doubt”.

According to the opinion of the majority of scholars, Muslims are allowed to fast only if the sight of the new moon is proven.

Scholars differ on whether fasting on this day is reprehensible or prohibited. The preferred opinion is that it is prohibited to fast on the day of doubt. This is in agreement with the meaning of the following hadith:

‘Ammar ibn Yasir said: “Whoever fasts on the day concerning which there is doubt has disobeyed Abul-Qasim (Prophet Muhammad, peace and blessings of Allaah be upon him).” Al-Bukhary related this Hadith as Mu’allaq1  (Suspended).

1: Mu’allaq Hadith is a hadith in which one or more narrators is removed from the beginning of the isnad i.e the chain of narration. Scholars consider Mu’allaq hadiths found in Sahih Al-Bukhary to be authentic.