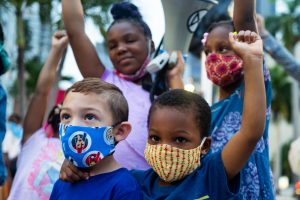 This video presents the story of the first anti-racist, from the 7th century, who set in motion universal principles that forever changed the discourse on racial equality.

Bilal ibn Rabah was born into slavery, a condition that was compounded after he became one of the first believers to follow the teachings of Prophet Muhammad.

Bilal’s father was an Arab slave and his mother was a former princess of modern day Ethiopia, who was also enslaved.

Bilal was ruled by a master, who punished him for his conversion to Islam. He dragged Bilal around Makkah, encouraging people to mock him. He even tried to force him to renounce his faith by placing a large rock on his chest and pinning him on the ground.

But far from renouncing his faith, Bilal showed a defiance and strength in the face of persecution and violence.

Impressed by Bilal’s steadfastness to the Islamic faith, Prophet Muhammad sent one of his closest friends, Abu Bakr, to pay for Bilal’s freedom.

Bilal, the Muezzin of the Prophet Muhammad (God Bless Him and Grant Him Peace)

Once freed, Bilal rose to prominence in the early Muslim community. Prophet Muhammad appointed him to serve the mosque by using his melodious voice to call the believers to prayer.

Bilal was a black man, and, for some, his blackness made him unfit for such an honor.

On one occasion, a companion of the Prophet, a man named Abu Dhar, disparagingly said to Bilal, “You, son of a black woman.”

This drew a swift rebuke from Prophet Muhammad.

“Are you taunting him about his black mother?” asked the Prophet. “There is still some influence of ignorance in you.”

The ignorance the Prophet identified was rooted in the misguided view that a person’s race reflects his or her moral character or social status.

In fact, the Prophet Muhammad’s message of racial equality stood in stark contrast to the prevalent racial animosities of 7th century Arabia.

Scholars refer to the period prior to the advent of Islam as Jahiliyyah, a time of ignorance, which included racism.

The First Declaration of Racial Equality

Arguably, Prophet Muhammad was the first person in human history to declare, in no uncertain terms, that no person is above another by virtue of race or ethnicity.

This declaration is crystallized in one of the Prophet’s notable speeches: His Last Sermon, as it is known, which was delivered on Mount Arafat in 632 A.D.

In that sermon, the Prophet Muhammad unequivocally condemned racism when he said:

After performing the Hajj, or Islamic pilgrimage, to the city of Makkah, Malcolm wrote his famous letter from Makkah in which he said:

“There were tens of thousands of pilgrims from all over the world. They were of all colors, from blue eyed blondes, to black skinned Africans. But we were all participating in the same ritual, displaying a spirit of unity and brotherhood that my experiences in America had led me to believe never could exist between the white and the non-white.”

He added that he had never before seen sincere and true brotherhood practiced by all colors together, irrespective of their color.

The Hajj, for Malcolm, represented a shift away from racism and towards racial equality.

The teachings of Prophet Muhammad encouraged all people to strive towards anti-racism, which is quite different than simply non-racism.

While non-racists do not openly express prejudiced views, they also do not work to dismantle racism in any given society.

The Prophet of Islam actively challenged and dismantled the covert, the overt, and the systematic racism around him. He identified racism as a symptom and identified its root cause as arrogance in the human heart.

As our world becomes more and more diverse and interconnected, it is imperative that we strive to follow the teachings of Prophet Muhammad.

I am not a Muslim myself, but I have to say that I am deeply inspired by the anti-racism of Prophet Muhammad, because he showed that a person is distinguished over another not by race, but, rather, by the quality of one’s character and conduct.

I am Craig Considine for the Emir Stein Center.