On the Day of Resurrection, Allah will give the right of intercession to Prophet Muhammad (Allah bless him and grant him peace) in the first place. Other intercessors include the angels, the prophets, and the believers and, what’s more, there will be the Intercession of Allah.

There are still others who will be enjoying this high status on the Day of Judgment. We wrote about the first four intercessors in a previous article. The other intercessors include the following: 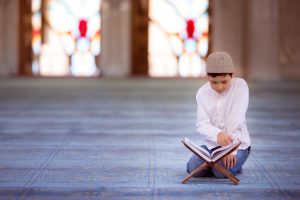 In the Hereafter, children will be united with their good and righteous parents even if they fall short of their parents’ status in the Paradise.

Once they die, martyrs get a lot of rewards and favors in their next life. One of these favors is that they will intercede with Allah on behalf of their relatives. Narrated Al-Miqdam bin Ma’diykarib:

That the Messenger of Allah (ﷺ) said: “There are six things with Allah for the martyr. He is forgiven with the first flow of blood (he suffers), he is shown his place in Paradise, he is protected from punishment in the grave, secured from the greatest terror, the crown of dignity is placed upon his head – and its gems are better than the world and what is in it – he is married to seventy two wives from the wide-eyed houris of Paradise, and he may intercede for seventy of his close relatives.” (Al-Tirmidhi)

Parents’ righteousness and belief benefit their children in this life and Afterlife. In this life, children may follow and learn from their parents the teachings of Islam. In the Hereafter and as a result of following in their parents’ footsteps, children will be united with their parents even if they fall short of their parents’ status in the Paradise. Allah says,

“Moreover, (as for) those who (in the world) believed -and whose children followed them in faith- We shall unite their children with them. And We shall not deprive them of anything (from the rewards) of their (good) work.” (Quran 52:21)

It may happen that a child dies at an early age. If the child’s parents are patient, Allah will provide them with huge rewards that outweigh their anguish. Of these rewards, such a child will intercede with Allah on behalf of his or her parents. Abu Hassan reported:

I said to Abu Huraira that my two children had died. Would you narrate to me anything from Allah’s Messenger (ﷺ) a hadith which would soothe our hearts in our bereavements? He said: Yes. Small children are the fowls of Paradise. If one of them meets his father (or he said his parents) he would take hold of his cloth, or he said with his hand as I take hold of the hem of your cloth (with my hand). And he (the child) would not take off (his hand) from it until Allah causes his father to enter Paradise. (Muslim)

The Gracious Quran, especially Surat Al-Baqarah (the Cow) and Al-‘Imran (the Family of ‘Imran), will be interceding with Allah on the Day of Resurrection on behalf of those who believe in, always recite and follow the teachings of the Quran. Abu Umama said he heard Allah’s Messenger (ﷺ) say:

Recite the Qur’an, for on the Day of Resurrection it will come as an intercessor for those who recite It. Recite the two bright ones, Surat Al-Baqara and Surat Al ‘Imran, for on the Day of Resurrection they will come as two clouds or two shades, or two flocks of birds in ranks, pleading for those who recite them. Recite Surat Al-Baqara, for to take recourse to it is a blessing and to give it up is a cause of grief, and the magicians cannot confront it. (Mu’awiya said: It has been conveyed to me that here Batala means magicians.) (Muslim)

Living persons interceding on behalf of the departed

This happens when a Muslim person dies and Muslims make supplications to Allah to shower such a person with His mercy and to forgive him. Supplications are made just after a person’s death, during funeral prayer, and after burial. In addition, people who love the departed continue to make supplications for him or her. Here supplication acts as an intercession with Allah. ‘Abdullah b. ‘Abbas reported that his son died in Qudaid or ‘Usfan. He said to Kuraib to see as to how many people had gathered there for his (funeral). He (Kuraib) said:

So I went out and I informed him about the people who had gathered there. He (Ibn ‘Abbas) said: Do you think they are forty? He (Kuraib) said: Yes. Ibn ‘Abbas then said to them: Bring him (the dead body) out for I have heard Allah’s Messenger (ﷺ) as saying: If any Muslim dies and forty men who associate nothing with Allah stand over his prayer (they offer prayer over him), Allah will accept them as intercessors for him. (Muslim)

In fact, it is part of our Islamic teachings and traditions to make supplications to Allah for all our Muslim brothers and sisters who came before us even if we may not have seen them. This often happens especially when good sons or daughters ask Allah to forgive their parents. On the authority of Abu Hurairah (Allah be pleased with him) who said: the Messenger of Allah (Allah bless him and grant him peace) said:

Allah (The One to whom belongs absolute power and majesty) does raise the status of a good servant in the Paradise. Thereupon, he or she will say, “O my Lord! How have I reached this degree?” He will say, “This is through asking for forgiveness for you by your son (or daughter)”. (Imam Ahmed)

Things that bring about intercession

Ibn ‘Umar (Allah be pleased with them) reported Allah’s Messenger (ﷺ) as saying:

He who patiently endures the hardships of it (of this city of Medina), I would be an intercessor or a witness on his behalf on the Day of Resurrection. (Muslim)

2. Saying prayers of supplications related to Adhan (the call to prayer)

When you hear the Mu’adhdhin (the caller to prayer), repeat what he says, then invoke a blessing on me, for everyone who invokes a blessing on me will receive ten blessings from Allah; then beg from Allah al-Wasila for me, which is a rank in Paradise fitting for only one of Allah’s servants, and I hope that I may be that one. If anyone who asks that I be given the Wasila, he will be assured of my intercession. (muslim)

Abud-Darda’ (May Allah be pleased with him) said:

The Messenger of Allah (ﷺ) said, “Those who frequently resort to cursing (people) would neither be accepted as witnesses nor as intercessors on the Day of Resurrection.” (Muslim)