‘Eid al-Fitr (festival of fast-breaking) and ‘Eid al-Ad-ha (festival of sacrifice) are the only two main festivals in Islam.

There are certain acts of worship and etiquette Muslims should observe on those days to express their gratitude to Allah.  Among these acts of worship is the ‘Eid prayer. Allah says,

“Rather, (He wills) for you to complete the number (of prescribed days) _ and that you shall extol God for (the blessing of faith to) which He has guided you, so that you may give thanks (to Him alone for easing its way and establishing you therein).” (Quran 2: 185) 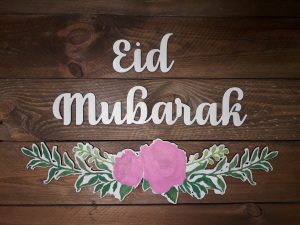 There are certain acts of worship and etiquette Muslims should observe on those days to express their gratitude to Allah.

The legal ruling regarding the `Eid prayer

This means that every Muslim must perform it. This is the opinion of Imam Abu Hanifah and Shaikh al-Islam Ibn Taimiyah. They quoted the following Hadith to support their opinion:

Umm ‘Atiyya reported: The Messenger of Allah (ﷺ) commanded us to bring out on ‘Eid al-Fitr (festival of fast-breaking) and ‘Eid al-Ad-ha (festival of sacrifice) young women, menstruating women and purdah-observing ladies, menstruating women kept back from prayer, but participated in goodness and supplication of the Muslims. I said: Messenger of Allah, one of us does not have an outer garment (to cover her face and body). He said: Let her sister cover her with her outer garment. (Al-Bukhari and Muslim)

They interpret the commandment in the hadith to mean obligation. Although it is not obligatory for women to perform the prayer in congregation, the Prophet (peace be upon him) ordered them to witness the ‘Eid prayer. This, in turn, means that it is obligatory for men.

This means that the ‘Eid prayer must be performed. Here, not every single person falls under the obligation. A group can perform the obligation on behalf of others.

This opinion is, however, not that strong. If the ‘Eid prayer is collectively obligatory, women won’t fall under the obligation which is in contradiction with the above mentioned Hadith.

If we take the following Hadith into consideration, we can understand the commandment in the above mentioned hadith to mean recommendation. This is the opinion of the majority of the scholars.

The time of ‘Eid prayer

The ‘Eid prayer has the same time as Duha prayer. Duha means the morning sunshine. In the technical usage it refers to a specific time that starts about 10 or 15 minutes after the sunrise and finishes 10 or 15 minutes before the Dhuhr (noon) prayer or before it’s high noon i.e. when the sun starts to move from its highest point in the sky towards the direction of the sunset.

The place of its performance

It is recommended that the ‘Eid prayer be performed in the open, namely, outside mosques in a wide place. The Prophet (blessings and peace of Allah be upon him) and his Companions (may Allah be pleased with them) used to perform it in the desert. However, the place should be near so that it can be easy for people to attend.

It is reprehensible to perform the ‘Eid prayer in mosques without any legal excuse.

The recommended acts of the Day of ‘Eid

1. Eating before ‘Eid prayer on ‘Eid al-Fitr and after it on ‘Eid al Ad-ha

On ‘Eid al-Fitr, it is recommended to eat dates or something else if there is not any before going out to perform the prayer. This shows how obedient Muslims are in hastening to fulfill Allah’s commands by breaking the fast.

Narrated Anas bin Malik: Allah’s Messenger (ﷺ) never proceeded (for the prayer) on the Day of ‘Eid al-Fitr unless he had eaten some dates. Anas also narrated: The Prophet (ﷺ) used to eat odd number of dates.

2. Going out for the ‘Eid prayer in the early hours of the morning

One can go out after performing the fajr (Dawn) prayer. Only the Imam can come on the time of the prayer.

The Prophet (ﷺ) used to proceed to the Musalla (the place of the prayer) on the days of ‘Eid al-Fitr and ‘Eid al-Ad-ha; the first thing to begin with was the prayer… (Al-Bukhari)

3. Going to the place of the prayer on foot

Legal excuses such as sickness, the place for prayer is far, etc. allow the person to ride.

4. Taking a ritual bath and to putting on perfume

Abdullah ibn ‘Umar (may Allah be pleased with him) used to take a ritual bath before proceeding to perform the ‘Eid prayer.

‘Umar ibn al-Khattab said, “O Allah’s Messenger (ﷺ)! Buy this cloak and adorn yourself with it on the ‘Eid festivals and on meeting the delegations.” (Al-Bukhari)

Scholars say the wisdom behind that is to emulate Prophet Muhammad (peace and blessings of Allah be upon him). There are other opinions regarding this, however, this is the preferred one.

Jabir (May Allah be pleased with him) reported:

On the occasion of the ‘Eid, the Prophet (ﷺ) would proceed to the prayer place taking one route and returning from another. (Al-Bukhari and Muslim)

7. Reciting Takbir in a loud voice

“Rather, (He wills) for you to complete the number (of prescribed days) _ and that you shall extol God for (the blessing of faith to) which He has guided you, so that you may give thanks (to Him alone for easing its way and establishing you therein).” (Quran 2: 185)

‘Extol God’ means to say takbir. One starts to recite takbir when he comes out of his house and after he reaches the place of the prayer. This continues till the time of the prayer.

The majority of scholars are of the opinion that the time for takbir on ‘Eid al-Fitr starts from after the dawn prayer until the time for performing the ‘Eid prayer. Others say that it starts immediately after seeing the new moon of the month of Shawwal.

There are many forms of takbir. The following is one of the most famous:

Different expressions can be used here such as ‘may Allah accept our and your good deeds’ or ‘Eid Mubarak’ (I wish you a blessed ‘Eid), etc.