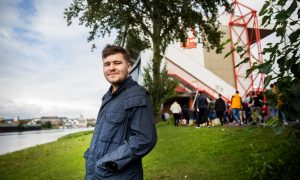 Mohamed Salah really and honestly inspired me. I’m a Nottingham Forest season-ticket holder, I can be myself but because I made the declaration of faith I’m a Muslim. I’m still me and that’s what I took from Mohamed Salah. I’d love to meet him, just to shake his hand and say “Cheers” or “Shukran”.

I don’t think my mates quite believe that I’m a Muslim because I’ve not really changed. I just think my heart is better. I’m really trying to change on match days. Normally it’s pub, put a bet on, then after the game back to the pub and realise you’ve lost a lot of money. It’s hard when you’re used to such a culture and it’s part of football for a lot of people.

How Ben used to think about Islam?

I’m embarrassed to say this but my opinions on Islam used to be that the religion, the culture and the people were backward; that they didn’t integrate and wanted to take over. I always looked at Muslims like the elephant in the room. I had a hatred of Muslims.

When I was in sixth form it was a period where I think I needed someone to blame for my misfortunes. Unfortunately Muslims got the brunt of it and I quickly discovered right-wing media pages. They sort of groomed me by sending me long propaganda pieces and suchlike.

Even though I had these horrible ideas of Islam, I would never say them to a Muslim. At this point I didn’t know any Muslims. My degree in Middle Eastern Studies at the University of Leeds changed everything.

The Academic Study of Islam

We had to do a dissertation and I wanted to do something a bit different. I remember my dyslexia tutor telling me: “What about Mohamed Salah’s song?” I was aware of it and I thought it was fantastic but I hadn’t considered it in those terms.

I finally got the question: “Mohamed Salah, a gift from Allah. Is the performance of Mohamed Salah igniting a conversation that combats Islamapobia within the media and political spheres?”

The Liverpool fans’ song – to the tune of Dodgy’s hit Good Enough – includes the line “If he scores another few then I’ll be Muslim too”, and I literally took that to heart.

I was a typical white-boy student who went to a different city, would get absolutely hammered and lived the student life. My degree was the first time I learned about Islam in an academic way.

University gave me the opportunity to meet a lot of students from Saudi Arabia. I thought they were evil people who carried swords but they’re the nicest people I’ve met. The conceptions I had about Arab countries completely dissolved.

It’s the way he lives his life, how he talks to people. The other week he posed for a picture with a Liverpool fan who suffered a broken nose chasing after him. I know some other footballers would do that but you expect it now from Salah.

At university I interviewed Egyptian students and when they found out my research was about “Mohamed Salah, a gift from Allah” – which is also another Liverpool song – they would talk to me for hours about how great he is and what he’s done for their country. One million Egyptians spoiled their ballots and voted for him to be president last year.

One of the Egyptians I talked to told me that Salah encompasses what being a Muslim is, following Islam correctly. He believed that Salah is making people love Muslims again.

That really resonated with me. When Salah scores I think he’s scoring for the faith. When he won the Champions League I said to my friend that was a victory for Islam. After each of his goals Salah practises the sujood (prostration) and exposes a very Islamic symbol to the world. How many people watch the Premier League every week? Millions globally.

Salah showed me that you can be normal and a Muslim, if that’s the right phrase. You can be yourself. He’s a great player and is respected by the football community and his politics, his religion, don’t matter – and to me that’s what football can do.

True Islam is not portrayed in the media

When people read the Quran, or read about Islam, they see something different that is not always portrayed in the media. I’m new to the Islamic community and I’m still learning. It is hard. It’s a lifestyle change.

What would I say to the Ben of old? I’d give him a smack, to be honest, and I’d say: ‘How dare you think like that about a people that are so diverse. You need to start talking to people. You need to start asking the questions.’ We live in a multicultural, multifaith, multinational society.

Last season Chelsea fans were singing “Salah is a bomber”. That’s the first time on my social media that I had a right go. I was livid because I’m for football banter but you know when things are just not true.

Now, I’d say to Muslim kids: ‘Don’t be afraid to go to a football match.’ I think that’s an issue we have to look at from both sides. I was afraid of being segregated. I don’t want to lose my mates because I look at them as brothers to me. Now I’ve got a fifth of the world’s population as brothers and sisters.

The community has to branch out, play football, go to football. It’s up to us to realise that we’re in this together. And the best spokesman for that could be Mohamed Salah.