Legal excuses include sickness, travel, and the fear that one cannot establish prayer as completely as those without excuses. The Lawgiver[i] has lightened the hardship for the excused Muslims and ordered them to perform prayer as much as they can. This ruling shows the ease and relief intended for Muslims in the Shari’ah (Islamic Law), as it always eliminates hardships. Allah says:

Moreover, the Prophet (Allah bless him and grant him peace) said,

“If I order you to do something, then do of it as much as you can” (Al-Bukhari and Muslim)

These are just a few examples of the many legal texts that indicate the favor of Allah upon His servants. Moreover,  they Allah has granted us ease in whatever He ordained for us. Among the things made easy for Muslims is the prayer of the persons with excuses of sickness, travel, or fear.

Sickness as a Legal Excuse 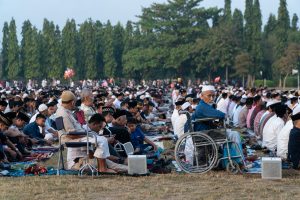 Prayer enjoys a great importance in Islam and a Muslim must establish prayer whether he is healthy or sick.

Prayer is not to be abandoned under any circumstances. The Muslim patient must perform prayer standing if he can. Also, he or she may lean on a stick, or the like, if he needs this. For the related legal maxim states, “The means to fulfill an obligation are to be considered obligatory.” A Muslim patient may sit in prayer if he or she cannot stand due to one of the following reasons (or the like):

If he or she

Scholars unanimously agree that if a Muslim person is unable to stand in obligatory prayer, it is permissible for him to sit. Moreover, there is no need for him to perform that prayer again when he or she gets well. The reward for such prayer does not decrease.

The way a person sits is to be according to the way he desires, for the Lawgiver does not ordain a specific way of sitting (for the patient). So in whatever manner he or she sits, it is permissible.

If a Muslim patient cannot sit in prayer and it causes him a real difficulty to sit, then it is permissible for him to lie on his side facing the qiblah[ii]. It is desirable for him in this case to lie on his right side.

In case there is no one to help him face the qiblah and he cannot face it himself, then it is permissible for him to perform prayer facing whatever direction he can face. In addition, if a Muslim patient cannot lie on his side in prayer, he or she may lie on his back, making his legs face the qiblah if possible.

The proof of the legal permission detailed previously is the hadith related by Al-Bukhari and the Compilers of Sunan on the authority of Imran Ibn Husayn (Allah be pleased with him) who narrated:

An-Nasafi added in his narration that the Prophet (Allah bless him and grant him peace) said:

” ..And if you cannot, perform prayer lying on your back.”

Prayer Must not be Postponed

Here, we should draw the attention to those Muslims who give up prayer when they are sick or when they have had surgical operations. They may claim that they cannot perform the acts of prayer properly or perform ablution, or their clothes are impure or any other excuses. Such people commit a big mistake since a Muslim is not permitted to give up prayer. It does not matter if you cannot perform some of its conditions, integral parts, or obligations. In such case, you must perform prayer as much as you can. Allah says:

Having a Legal Excuse during the Prayer

The aforementioned legal rulings concern whoever has a legal excuse from the beginning of prayer until its end. However, there are some cases in which a Muslim may have a legal excuse for only a part of his prayer such as:

One may start prayer when one is

In such cases, one must shift to the position that legally suits one’s ability and it is obligatory then to complete one’s prayer in this state. This is because Allah, Exalted be He, says:

Thus, one is to shift to the standing posture when one is able, and one is to shift to the sitting posture when one is unable to stand, and so on. If one is able to stand and sit but cannot bow or prostrate, one is to beckon bowing with one’s head while standing, and beckon prostration with one’s head while sitting to make a difference (between bowing and prostration) as much as one can.

Following the Doctor’s advice regardless of Ability

A Muslim patient is permitted to perform prayer lying on his back though he is able to stand if a trustworthy Muslim doctor tells him to do so. The doctor knows about the patient’s condition and what may affect it badly. The Prophet (Allah bless him and grant him peace) performed prayer while sitting when the right side of his body was injured. (Al-Bukhari and Muslim)

Also, Umm Salamah (Allah be pleased with her) did not prostrate in her prayer when she suffered from ophthalmia. (Ibn Abu Shaibah and Al-Bahaqi)

[i] The lawgiver of Shari’ah (Islamic Law) is Allah, Exalted be he; the term can also refer to the Prophet (Allah bless him and grant him peace) as he only ordained what Allah revealed to him.

[ii] The qiblah: the direction of Prayer, namely, towards the Ka’bah.