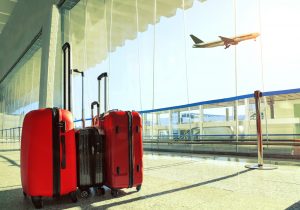 The majority of scholars including the shafi’i School of Fiqh believe that a traveller may shorten the four-rak’ah prayer to only two. On the other hand, some scholars of the Zahiri School of Fiqh believe it is obligatory. The Zahiri Scholars base their opinion on the fact that there is no authentic proof that shows that Prophet Muhammad (Allah bless him and grant him peace) completed the Prayer during travel.

In addition, ‘A’isha, the wife of the Messenger of Allah (ﷺ), reported:

The majority of scholars’ opinion is that shortening the Prayer is permissible but some of them believe it is recommended. Allah says,

Now, when you strike out in the land, then there shall be no blame on you if you shorten (something) of the Prayer, should you fear that those who disbelieve will assail you. Indeed, the disbelievers are to you a clear enemy. (Quran 4:101)

The sentence “there shall be no blame on you” does not denote obligation. On the other hand, you may say that according to the apparent meaning of the verse shortening the Prayer is allowed only when one feels unsafe. “People are now safe!”, ‘Umar ibn Al-Khattab wondered upon reciting the above mentioned verse. “It is an act of charity which Allah has done to you, so accept His charity”, said Prophet Muhammad (Allah bless him and grant him peace). (Muslim)

According to the Shafi’i school of Fiqh, there are five prerequisites for shortening the Prayer. Let us consider these prerequisites.

Prerequisites for Shortening the Prayer

1. Travel must not be for committing any acts of disobedience

The purpose of shortening the Prayer is to lighten the travel burden for people. That’s why travelling for theft or robbery for example can never be a reason that allows a person to shorten the Prayer. However, there is another opinion which does not differentiate between travels whether they are legal and for fulfilling permissible deeds or not. Moreover, there is no explicit evidence for such differentiation.

2. An outward journey (without return) must be 16 Parasangs long or 80 km

So long as an outward journey is about or more than 80 or 82 km in length, you may, then, shorten your prayer and break the fast. “Ibn ‘Umar and Ibn ‘Abbas (Allah be pleased with both of them) used to shorten the Prayer and break the fast when they travelled for four barids[i] which are equal to 16 parasangs”, related Al-Bukhari as part of a Mu’allaq (Suspended) Hadith in his Sahih Al-Bukhari.

Discussing this opinion, some scholars believe that neither this hadith is Marfu’ (elevated) to Prophet Muhammad (Allah bless him and grant him peace) nor they used to measure distances at that time. That’s why there are lots of different opinions on this issue. In addition, Ibn ‘Umar and Ibn ‘Abbas (Allah be pleased with both of them) were reported to have expressed opinions different to what is mentioned above. Yahya ibn Yazid al-Huna’i reported:

I asked Anas ibn Malik about shortening of prayer. He said: When the Messenger of Allah (Allah bless him and grant him peace) had covered a distance of three miles or three farsakh (parasang) (Shu’ba, one of the narrators, had some doubt about it) he observed two rak’ahs. (Muslim)

Although this hadith is related by Imam Muslim, the majority of scholars do not act according to it. This may be due to the doubt the narrator had. Moreover, some scholars of hadith regard the chain of narration of this hadith as defective.

Due to these differences and the lack of evidence which is free from defects or oppositions, it appears that what counts here are the people’s customs.

3. Performing the Four-Rak’ah Prayer in its Prescribed Time

If you miss one or more prayer before setting off for a journey, you must make up for such prayer in full during the journey. This is because the time of performance for this or these prayers is up before travelling.

4. Intending to shorten the Prayer just before or at the beginning of the Prayer

If you perform the Prayer in congregation and you do not know whether the Imam will shorten the Prayer or not, you may depend in your intention on the Imam’s intention. Not knowing which kind of Hajj Prophet Muhammad (Allah bless him and grant him peace) had performed, Ali ibn Abi Talib (Allah be pleased with him) depended on the intention of the Prophet (Allah bless him and grant him peace).

5. The traveller must not be following a resident Imam

This is also a prerequisite to follow the imam of prayer. If the imam is a traveller and will shorten the prayer, you must do the same. On the contrary, if he is a resident, you should perform your prayer in full even if you come late and join the prayer in the middle or last rak’ah of it. “Why do we perform prayer in full when we join the congregational prayer with you and shorten it at our camp?”  Musa ibn Salamah Al-Hudhali asked ibn ‘Abbas. “This is the Sunnah of Abu Al-Qasim (Prophet Muhammad, Allah bless him and grant him peace)”, he replied.

How many days may the traveller shorten the Prayer?

Scholars differentiate between travellers who do not know exactly when they will return home and others who may be considered domiciled residents. The first kind of travellers shortens the prayer even if the journey takes a long time.

The second kind who knows how long the journey will take may shorten the prayer for only three or four days. 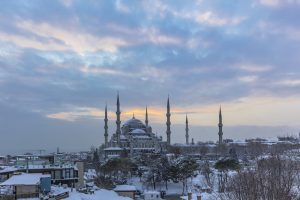