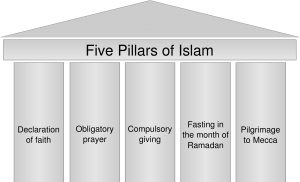 Allah’s favors are countless, yet the greatest and the most important one is the divine guidance to Islam. Once a person accepts Islam, they receive the first good tiding which is the forgiveness of all their past sins. Muslims should always thank and praise Allah that He guided them to Islam because Islam’s teachings and principles give a true meaning to this life and the Hereafter.

Islam encourages its followers to start, step by step, to learn those teachings so that they can worship Allah correctly and gain the great reward specified for them. The more they learn the more reward they will get.

Among those teachings and principles are the five pillars of Islam whose correct application helps a Muslim to better perfect their faith, behavior and manners and the reward for abiding by them is so great. Now, let’s have a look at these five pillars.

1. The Shahada, the Declaration of Faith

For a person to be a Muslim, he or she has to bear witness that there is no god but Allah and to bear witness that Muhammad is His servant and Messenger and that Jesus (Isa) is a servant and messenger of Allah. Having believed and pronounced that, one is, then, a Muslim who has performed the first pillar of Islam: the Shahada (the Declaration of Faith). Moreover, these are the best and the greatest words ever pronounced.

The believers in this Declaration of Faith have taken with Allah a binding covenant that He shall admit them into the Paradise and save them from the Hellfire or bring them out of it if they were to enter it. The Shahada is also the firmest handhold. Should the Shahada be the last words pronounced before a person’s death, he or she will enter the Paradise.

All Allah’s Prophets and Messengers, including Abraham (Ibrahim), Noah (Nu’), Moses (Musa), Jesus (Isa) and Muhammad (blessings and peace of Allah be upon them all), were sent to call people to believe in the Oneness of Allah. Allah, the Sole Creator, is One Who has no father, no mother, no consort and no son. Thus, anyone who claims Jesus or any other prophet to be god or son of god is a disbeliever.

Indeed, Allah Himself, His angels, messengers, including Jesus (peace be upon him), and people with deep knowledge bear witness that there is no god but Allah. In addition, one of the purposes of sending messengers and revealing down Scriptures is warning people who say Allah has a son or associate false deities with Allah.

As well as being the second pillar of Islam, the Salah (performing prayer) is the first practical pillar. It is the most beloved act of worship by Allah. When a Muslim performs the five daily prayers, all the minor sins he or she committed in that day will be forgiven.

The Salah is the link between Allah and His servant. For the person who performs it, Salah is the proof of faith, and it brings light for them in this world, in the grave and in the Hereafter. It guards one against immorality and evil, too. When trials and tribulations afflict people, they are encouraged to resort to it.

Reciting the Gracious Qur’an in prayer reassures the hearts of the believers and reminds them of the Hereafter and meeting with Allah on the Day of Judgment. This is what gives them strength and makes the acts of worship easy to perform. During prayer, the Muslim enters into intimate dialogue with Allah through reciting the best and the greatest sura (chapter) of the Qur’an i.e. Chapter of Al-Fatihah (the Opening).

To stress the importance of the Salah in Islam we have to say that it is the bequest of Prophet Muhammad (peace and blessings of Allah be upon him) before his death. Besides, it is the first thing people shall be held accountable for on the Day of Judgment.

It is worth mentioning that when Sarah, the wife of Abraham (Ibrahim), (peace and blessings of Allah be upon them both) was captured by an unjust ruler, Abraham performed prayer. Then, Allah protected her and she was released safely.

Zakat is the third pillar of Islam. There are a lot of verses in the Qur’an and sayings of the Prophet (peace and blessings of Allah be upon him) that orders people to pay Zakat. If the wealth of a Muslim meets certain criteria, it is obligatory for them to pay a mere 2.5% of their wealth.

Zakat carries many benefits for the Muslim community for it purifies money, hearts and souls. Allah blesses the wealth of the givers. In fact, it is Allah who nurtures His creation and sustains it. Allah is the True Owner of all that is there in the earth and in the heavens.  It is right that rich people help the poor as an act of thankfulness to Allah.

Every morning, an angel invokes Allah to increase the wealth of the people who pay Zakat. Not only is it an act of worship, it is also one of the forms of humanitarian aids and social solidarity among the Muslim community. Zakat puts an end to the problems of poverty, homelessness, food and water shortage, etc.

Siyam (Fasting) is the fourth pillar of Islam. It means abstinence from food, drink and sexual intercourse from dawn to sunset during Ramadan, the ninth month in the lunar Islamic calendar.

The obligation of Fasting is meant to achieve certain goals. Allah does not want to torture us by obligating this kind of worship. On the contrary, He wants us to reach the highest degree of faith i.e. the degree of benevolence. This degree of faith, which is better than the two other degrees: Islam and Iman (Faith), is easily realized through fasting. What is meant by ‘benevolence’ here is the technical meaning of the term which is to worship Allah as if you see Him, but if you cannot see Him, He sees you.

Another good advantage of Siyam is to achieve piety or Allah-fearing. It nurtures patience and that is the reason why it is known as the Month of Patience.  On the other hand, Fasting helps people purify their souls and keep themselves away from indulging into or committing acts of disobedience.

The reward from Allah for performing Siyam in Ramadan is the forgiveness of all past sins. Moreover, fasting one day equals ten days whose reward is only known to Allah. Thus, we can say fasting the month of Ramadan equals ten months in reward. In general, any good deed is rewarded by ten times the like of it. On the Day of Judgment, the Paradise has a gate specified for those who fast.

If fasting causes any harm to the worshipper, they do not fast and feed an indigent person instead. In the month of Ramadan, there is the Night of Majesty on which Allah first revealed the Qur’an. The worship of Allah during this night is better than the worship during a thousand months without that night.

Hajj (Pilgrimage) is the fifth pillar of Islam. Muslims from all over the world travel to Makka (mecca) to perform Hajj at the end of the lunar year. It’s obligatory for only those who can afford it and for only once in a lifetime. The reward for the accepted Pilgrimage is entering the Paradise.

Like the other pillars of Islam, the Pilgrimage is an exercise to the soul so that it can succeed in staying away from mischief, disputation, ungodliness, etc. If the pilgrim succeeds in keeping away from those bad manners, they will be back home with no sin at all.

Hajj teaches us to always remember Allah as all the rites in Hajj is mainly based on the remembrance of Allah. In Hajj, there is no difference that can be seen between a rich person and a poor one as all people dress the same.

In fact, there, here, is a lesson to be taught i.e. the unity of the Muslim nation that should be based on justice and benevolence. During Hajj, millions of Muslims can be seen worshipping Allah in one certain place where they fast at the same time, break their fast at the same time, pray to Allah at the same time and practice the other rites of Hajj at the same time.  Thus, on the ninth day of Dhul-Hijjah, the last month of the lunar year, Allah draws near the pilgrims, then praises them to the angels. This is called the Day of ‘Arafah on which Allah sets free too many of His servants from the Hellfire.

Finally, the acts of worship are so many. They include removing harm from the road, speaking to people nicely, helping the old and the weak, modesty and so on. However, the pillars of Islam are the greatest and the most important. The Declaration of faith is the most important at all.