What Books Do You Recommend for Seerah?

When you’re looking for a good book of Seerah, the best way to choose is to figure out what you’re hoping to gain from the experience. You can use the quick and handy recommendations in this video to make your choice based on your area of interests.

Shaykh Hasib Noor explains in the video below…

Messengers who Allah sent before Prophet Muhammad (peace be upon him) told their peoples about Muhammad’s Prophethood and mission. Moreover, Allah described him in the Holy Scriptures previous to the Gracious Quran. A covenant was made between Allah and all prophets that if He sent Prophet Muhammad (peace and blessings of Allah be upon him) while they were alive, they would believe and support him. Allah says,

And behold! God made (a sacred) covenant with all the prophets, (saying: Convey to your people) whatever I give you of the Scripture and (of revealed) wisdom. Then when there comes to you a (final) messenger who confirms what is with (all of) you (in fulfillment of My promise- ardently) shall you believe in him and (ardently) shall you support him. (God) said: Do you pledge your consent and accept My solemn compact (to fulfill this trust)? They said: We do so consent. He said: Then bear you witness (to it)! For, indeed, I am with you among those who so bear witness. (Quran 3:81)

After leaving Hagar and Ishmael at the place of the Sacred Mosque before it was built, Prophet Abraham (peace and blessings of Allah be upon him) made the following supplication:

“Our Lord! And send forth among (our descendants) a messenger from their own (midst) who shall recite to them Your verses, and teach them the (revealed) Book and the (way of prophetic) wisdom, and purify them. Indeed, it is You, You (alone) who are the Overpowering (One), the All-Wise.” (Quran 2:129) 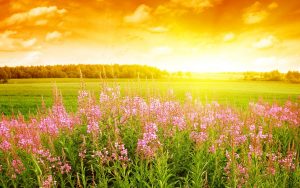 Our Lord! And send forth among (our descendants) a messenger from their own (midst) who shall recite to them Your verses, and teach them the (revealed) Book and the (way of prophetic) wisdom, and purify them.

Muhammad’s Description in the Holy Scriptures

Narrated Ata bin Yasar: I met `Abdullah bin `Amr bin Al-`As and asked him, “Tell me about the description of Allah’s Messenger (ﷺ) which is mentioned in Torah (i.e. Old Testament.”)

He replied, ‘Yes. By Allah, he is described in Torah with some of the qualities attributed to him in the Qur’an as follows: “O Prophet! We have sent you as a witness (for Allah’s True religion) and a giver of glad tidings (to the faithful believers), and a warner (to the unbelievers) and guardian of the illiterates. You are My slave and My messenger (i.e. Apostle). I have named you “Al-Mutawakkil” (who depends upon Allah). You are neither discourteous, harsh nor a noisemaker in the markets and you do not do evil to those who do evil to you, but you deal with them with forgiveness and kindness. Allah will not let him (the Prophet) die till he makes straight the crooked people by making them say: “None has the right to be worshipped but Allah,” With which will be opened blind eyes and deaf ears and enveloped hearts.” (Al-Bukhari)

This hadith highlights that Prophet Muhammad (peace and blessings of Allah be upon him) was precisely described in the Old Testament.

The Reaction of the Jews who Lived in Medina

Indeed, before the advent of Islam, the Jews who lived in Medina with the two rival tribes of Al-Aws and Al-Khazraj were weak and helpless. When the two tribes were cruel and harsh against them, the Jews would say that a prophet from among them was going to be sent and they would overpower the two tribes. Thus, the Jews knew very well about the coming of Prophet Muhammad (peace and blessings of Allah be upon him) although they did not think that he would be from among the Arabs. Allah says,

“So when this very Book came to them from God confirming what is with them, (they belied it) _ though beforehand they were (ardently) seeking (God’s) victory over those who disbelieved. Yet when that which they recognized (as a true message) came to them, they disbelieved in it. So may the curse of God be upon the disbelievers!” (Quran 2:89)

Prophet Muhammad (peace and blessings of Allah be upon him) was born in the Year of the Elephant when Abraha, ruler of Yemen, and his army wanted to use an elephant to destroy the Ka’bah. According to the authentic prophetic traditions, he was born on Monday. There are different opinions about the specific year of his birth being approximately 570, 568 or 569 CE. Also, there is no agreement about the month in which he was born. Some scholars think it is the month of Rabi’ Al-Awwal while others think it is the month of Rajab.

During the early months of his wife’s pregnancy, Muhammad’s father died. So, it is Allah Who cared for and protected him. Being born as an orphan, Muhammad was placed under the guardianship of his grandfather, ‘Abd al-Muttalib.

The genealogy of his family continues to Prophet Ishmael son of Prophet Abraham (peace be upon them). According to the majority of scholars, the information found in some relevant books tracing the lineage beyond Abraham back to Adam is not authentic.

The early babyhood and childhood

Muhammad was given to a wet nurse to breastfeed and look after him. This was a very well-known custom among Arabs. The wet nurse was called Halima al-Sa’diya (from the tribe of Bani Sa’d). There were other women who breastfed the Prophet (pace and blessing of Allah be upon him). Among those other wet nurses is a woman called Thuwaibah who breastfed him and his uncle Hamza ibn ‘Abd al-Muttalib. So, Hamza (may Allah be pleased with him) is Muhammad’s foster-brother. Also, Um Aiman used to look after him. When he was a small child living at Halima’s house, a very important incident which is the opening of his heart occurred.

The Incident of Opening Muhammad’s Chest

Anas b. Malik reported that Gabriel came to the Messenger of Allah (ﷺ) while he was playing with his playmates. He took hold of him and lay him prostrate on the ground and tore open his breast and took out the heart from it and then extracted a blood-clot out of it and said:

That was the part of Satan in thee. And then he washed it with the water of Zamzam in a golden basin and then it was joined together and restored to it place. The boys came running to his mother, i. e. his nurse, and said: Verily Muhammad has been murdered. They all rushed toward him (and found him all right) His color was changed, Anas said. I myself saw the marks of needle on his breast. (Muslim)