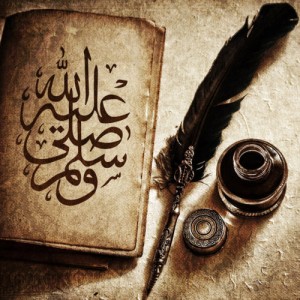 He was orphaned and poor, and for that reason he is reminded and ordered never to forsake the underprivileged and the needy.

“The Messenger (God’s peace and blessings be upon him) was born on a Monday, on the twelfth night of Rabi` Awwal, in the year of the elephant.”

Other accounts mention other months of the year, but throughout history there has been broad acceptance of that date among scholars and within Muslim communities. The Muslim calendar being a lunar one, it is difficult to determine exactly the solar month of his birth, but the “year of the elephant” to which Ibn Ishag refers corresponds to 570 CE.

The Last Prophet was born in one of Makkah’s noble families, Banu Hashim, which enjoyed great respect among all the clans in and around Makkah. This noble descent combined with a particularly painful and debilitating personal history. His mother, Aminah, was only two months pregnant when his father, `Abdullah, died during a trip to Yathrib, north of Makkah.

Fatherless at birth, young Muhammad was to live with the tension of the dual status implied in Makkah by a respectable descent, on one hand, and the precariousness of having no father, on the other.

Ibn Ishaq reports that the name Muhammad, quite unknown at the time in the Arabian Peninsula, came to his mother in a vision while she was still pregnant. (Ibn Hsham, As-Seerah An-Nabawiyah)

This same vision is also said to have announced to her the birth of the “master of this people” (sayyid hadhihi al-ummah); according to the vision, when he was born she was to say the words “I place him under the protection of the One (Al-Wahid) against the treachery of the envious.

Torn between her grief at her husband’s death and the joy of welcoming her child, Aminah said repeatedly that strange signs had accompanied the gestation, then the extraordinarily easy birth of her child.

Aminah soon became aware that she was the mother of an exceptional child. This feeling was shared by Muhammad’s grandfather, `Abdul-Muttalib, who took responsibility for him after his birth. In Makkah, it was customary to entrust infants to wet nurses belonging to the nomadic Bedouin tribes living in the nearby desert.

Because he was fatherless, one nurse after another refused to take the child into her care, fearing that his ambiguous status would bring them no profit. Halimah, who had arrived last because her mount was tired, decided with her husband that it was better for them to take the child, although he was an orphan, than to risk being mocked by their tribe when they went home. They therefore went back with the infant Muhammad, and Halimah, just like Aminah, tells of many signs that led her and her husband to think that this child seemed blessed.

For four years, the orphan was looked after by Halimah and lived with the Banu Sa`d Bedouins in the Arabian desert. He shared the nomads’ life in the most barren and difficult natural environment, surrounded, as far as the eye could see, with horizons bringing to mind the fragility of the human being and spurring contemplation and solitude.

Although he did not yet know it, Muhammad was going through the first trials ordained for him by the One, Who had chosen him as a messenger and was, for the time being, his Educator, his Rabb (Lord).

The Qur’an would later recall his particular situation as an orphan as well as the spiritual teachings associated with the experience of life in the desert:

Did He not find you an orphan and give you shelter? And He found you wandering, and He gave you guidance. And He found you in need, and made you independent. Therefore (for that reason), do not treat the orphan with harshness, nor chide him who asks. But the bounty of your Lord, proclaim! (Ad-Duha 93:6-11)

For each human being: never to forget one’s past, one’s trials, one’s environment and origin, and to turn one’s experience into a positive teaching.

Those verses of the Qur’an carry several teachings: being both an orphan and poor was actually an initiatory state for the future Messenger of God, for at least two reasons. The first teaching is obviously the vulnerability and humility he must naturally have felt from his earliest childhood.

This state was intensified when his mother, Aminah, died when Muhammad was six. This left him utterly dependent on God, but also dose to the most destitute among people. The Qur’an reminds him that he must never forget this throughout his life and particularly during his prophetic mission. He was orphaned and poor, and for that reason he is reminded and ordered never to forsake the underprivileged and the needy.

Considering the exemplary nature of the prophetic experience, the second spiritual teaching emanating from these verses is valid for each human being: never to forget one’s past, one’s trials, one’s environment and origin, and to turn one’s experience into a positive teaching for oneself and for others.

Muhammad’s past, the One reminds him, is a school from which he must draw useful, practical, and concrete knowledge to benefit those whose lives and hardships he has shared, since he knows from his own experience, better than anyone else, what they feel and endure.

The article is an excerpt from Dr. Tariq Ramadan’s book “In the Footsteps of the Prophet: Lessons from the Life of Muhammad, Oxford University Press (2007).