Among the great seasons of worship are the first ten days of Dhul-Hijjah, which Allah has favored over other days. There are numerous hadiths indicating that these ten days are better than all other days of the year, with no exception. The Muslim should hasten to utilize this opportunity by offering sincere repentance to Allah, and multiplying the good deeds in these blessed days. 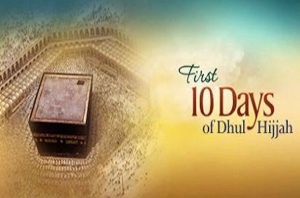 These ten days are better than all other days of the year.

Regarding the superiority of these days of Dhul-Hijjah, Sheikh Ibn `Uthaymin said, “Indeed it is a great favor and blessing from Allah that He has made for His righteous servants periods of time within which they can increase in good deeds to attain great rewards. One of these opportunistic periods is the first ten days of Dhul-Hijjah.

Ibn Kathir said that “the ten nights” referred to here are the ten days of Dhul-Hijjah, and this opinion was also held by Ibn `Abbas, Ibn Az-Zubair, Mujahid and others.

The Messenger of Allah (peace be upon him) said: “There are no deeds as excellent as those done in these ten days.” They (the companions) said, “Not even Jihad?” He said, “No, not even Jihad except a man who goes forth endangering his life and wealth and does not return with anything.” (Al-Bukhari)

…and remember the name of Allah in the appointed days. (Al-Baqarah 2:203)

Ibn `Abbas and Ibn Kathir said: this means in the ten days of Dhul-Hijjah.

The Messenger of Allah said: “There are no other days that are as great as these in the sight of Allah, the Most Sublime. Nor are there any deeds more beloved to Allah then those that are done in these ten days. So increase in tahlil (to say la ilaha ill Allah “No one worthy of worship but Allah), takbir (to say allahu akbar “Allah is the Greatest”) and tahmid (to say alhumdulillah “praise be to Allah”).” (At-Tabarani)

It is reported that the noble companion Sa`id ibn Jubayr, when the days of Dhul-Hijjah began he would strive to increase in good actions with great intensity to the extent that no one can do like that. (Ad-Darimi)

Ibn Hajar says in Fat-h Al-Bari: “The most apparent reason for the ten days of Dhul-Hijjah being distinguished in excellence is due to the assembly of the greatest acts of worship in this period, i.e. salawat (prayers), siyam (fasting), sadaqah (charity) and the hajj (pilgrimage). In no other periods do these great deeds combine.”

What Are the Recommended Acts in These Days

It is highly recommended to perform the obligatory acts at their prescribed times and to increase oneself in the supererogatory (nawafil) acts, for indeed, this is what brings a person closer to their Lord.

The Messenger of Allah said: “Upon you is to increase in your prostration to Allah, for verily you do not prostrate to Allah with even one prostration, except that He raises you in degrees and decreases your sins because of it.” (Muslim)

This has been mentioned as one of the acts of righteousness where Handabah ibn Khalid reports on the authority of his wife who reports that some of the wives of the Prophet (peace be upon him) said: “The Prophet would fast on the ninth of Dhul-Hijjah, the day of `Ashura and three days in every month.” (Abu Dawud)

Imam An-Nawawi said that fasting in these ten days is extremely recommended.

In the aforementioned narration of Ibn ‘Umar, the Prophet said: “So increase yourselves in saying la ilaha illa Allah, Allahu akbar and alhamdulillah.”

Imam Al-Bukhari (may confer mercy on him) said: “Ibn `Umar and Abu Hurayrah (may Allah be pleased with them both) used to go out to the markets in the ten days saying the takbir causing the people to follow them in this action.”

Ibn `Umar used to say the takbir in Mina during these ten days and after prayers, whilst on his bed, in his tent, in his gathering and whilst walking. What is recommended is to say the takbir aloud due to the fact that `Umar ibn Al-Khattab, his son and Abu Hurayrah used to do likewise, may Allah be pleased with them all.

Muslims has to strive with in reviving this sunnah that has become lost in these times and it was almost forgotten, even amongst the people of righteousness and goodness all of which is unfortunately in opposition to what the best of generations were upon (preserving and maintaining the supererogatory acts).

Fasting on the day of ‘Arafah

However, whoever is at `Arafah as a pilgrim then fasting is not expected of him, as it is reported that the Prophet stopped at `Arafah to eat.

What Should Be Avoided during Them?

Sheikh `Abudl-`Aziz ibn Baz (may Allah confer mercy on him) said: “If anyone wants to offer an Ud-hiyah, and the month of Dhul-Hijjah has begun, then it is haram for him to remove anything of his hair or nails or skin until he has slaughtered the Ud-hiyah, because of the hadith of Umm Salamah (may Allah be pleased with her) that the Prophet said: “When you see the new moon of Dhul-Hijjah – according to another version, When the ten days (of Dhul-Hijjah) begin – and any one of you wants to offer an Ud-hiyah, let him refrain (from cutting) his hair and nails.” (Muslim) According to another version, “Let him not remove anything from his hair and nails until he offers the Ud-hiyah.”

The reason for this prohibition is that when the person who wants to offer the Ud-hiyah joins the pilgrims in some of the rituals of Hajj – namely drawing closer to Allah by slaughtering the Ud-hiyah – he also joins him in some of the features of ihram, namely refraining from cutting his hair etc.

If one has to remove them because of necessity, there is no blame on him, such as if a nail breaks and it annoys him, so he cuts it, or if a hair gets in his eye and he removes it, or he needs to cut his hair in order to treat a wound and the like.” (Fatawa Islamiyyah)

Through this poster, we briefly introduce you to the types of Hajj, and- both in words and pictures, the rites of Hajj.

A Brief Guide to Hajj-

A Brief Guide to Hajj (eBook)

Book Description: A Brief Guide to Hajj in English

Read more about Hajj, the fifth pillar of Islam…