Allah (Exalted be He) addresses believers and commands them to worship Him alone and to be always kind to their parents especially when they grow old and weak in such a way that they should not utter the slightest word of disgust or disrespect to them. 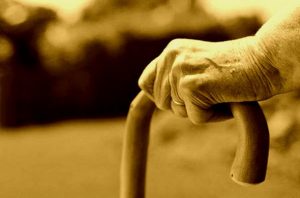 Allah commands believers to worship Him alone and to be always kind to their parents especially when they grow old and weak.

The Qur’an reminds children of their parents’ favor to them in childhood specially mothers who endured pains of weight in her body, delivery and weaning.

The human status, nowadays, matches with the Qur’anic facts; as the Muslims in the east and west belong to families with strong bonds where the children are dutiful to their parents in one way or another; while most mushriks ( polytheists’) children in non-Muslim societies depart their parents as soon as they reach puberty age.

Besides, their relationship with their parents gets too weak to visit them or to do any favor for them except on occasions (if they remember them). How wonderful are the  Qur’anic teachings that call children to do good to their parents not only throughout their life but also after their death.

Your Lord has decreed that you worship none but Him and that you be kind to parents. Whether one or both of them attain old age in your life, say not to them a word of contempt, nor repel them, but address them in terms of honor. (Al-Israa’ 17:23)

Baz, (2007) brings up that the Qur’an incites the affection of benefaction and mercy in the hearts of children, who always look forward and rarely look backward to care for their parents who  have spent the whole nectar of their life for the sake of their children until drought has approached them.

Prophet Muhammad (peace be upon him) instructs children to be aware of their parents’ status in Islam.

“The father is the middle door of Paradise (i.e. the best way to Paradise), so it is up to you whether you take advantage of it or not.” (Ibn Majah)

And out of kindness, lower to them the wing of humility and say, “My Lord! Bestow on them Your mercy even as they cherished me in childhood”. (Al-Israa’ 17:24)

That is why the Prophet (peace be upon him) commended children to treat their mother well more than any other person.

And We have enjoined upon man (care) for his parents. His mother carried him, (increasing her) in weakness upon weakness, and his weaning is in two years. Be grateful to Me and to your parents; to Me is the (final) destination. (Luqman 31:14)

True scientific discoveries usually agree with the Holy Quranic verses, so Al Tawashi (2006:265) mentions what scientists have discovered about the importance of mother’s milk, “Every day, a new benefit of mother’s milk to the baby is discovered.” He adds, “one of the facts that science has discovered about mother’s milk is that suckling up to two years after birth is very beneficial.” Moreover, “Mother’s milk is an unmatched mixture that is created by God has both an excellent food-source for the new born baby, and a substance that increases its resistance to disease. Even artificial baby food produced by today’s technology cannot substitute for this miraculous source of nutrition.”

Children should not forget their parents’ breeding and care. Allah orders children to be modest to their parents out of humbleness and mercy to them seeking reward from Allah. However, in case parents call their children to shirk, they should not obey them; yet they should keep kind and benevolent for them. This, indeed, reflects the extent of mercy of Allah upon parents even though they were disbelievers.

But if they endeavor to make you associate with Me that of which you have no knowledge, do not obey them but accompany them in this world with appropriate kindness and follow the way of those who turn back to Me in repentance. Then to Me will be your return, and I will inform you about what you used to do. (Luqman 31:15)

“If they help you in the obedience to Allah, guide and cultivate you with a correct upbringing then they deserve to be obeyed. If, however, they both deviate and strive with much effort with you to fall into shirk (associating other beings/gods) with Allah then there is no obedience to them (in that). However, the general righteousness that you should have towards them does not become void even if they try and strive against you and harm you to disbelieve in Allah, it is upon you not to forget their rights; for you must be a good companion to them in this life.” (Sahih International)

In view of that, young Muslims should always remember this Prophetic hadith that calls children to regard their parents and to be watchful for them.

Luqman’s son is reminded of the rights of his parents on him, of the hardships mothers face while bearing and weaning their children and of the total dependence of infants on their mothers for two years. However, Man should be thankful to Allah first, then to his parents.

S`adi (1985) points out that one has to be respectful to his parents and that he should treat them gently, speak with them modestly using kind words, deal with them pathetically and avoid ill-treating them, particularly his mother who faced difficulty after difficulty since he was a clot until he was born, enduring his weight in her body, her sufferings from weakness and illness as well as pains of delivery.

Dr. Ahmad Muhammad Al khalidi is Researcher and translator, E L teacher and lecturer, an old member in the presentation to Islam committee.