Islam commands that in the hearts of the children the seeds of the greatness and importance of truth be sown, so that they may grow up and develop on truth and may become young in its lap; and they may give it its due place in their talks. 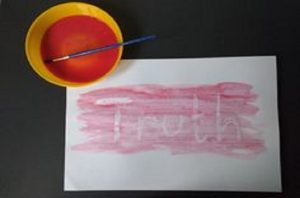 Adoption of straight dealing and telling the truth has been very strictly insisted upon in Islam.

`Abdullah ibn `Aamir said: “once my mother called me when the Prophet was present in my house. My mother asked me to come and said that she would give me a certain thing. He asked what did she want to give? She said that she wanted to give me a date (fruit). The Prophet said: “If you had not given him this date, then the committing of a falsehood would have been entered into your record of deeds”. (Abu Dawud)

Abu Hurayrah says that the Prophet has said:

“Anybody who called a child saying that he would give him a certain thing, and did not give it, then it is a lie.” (Ahmad)

It is worth noting that in what a wise way the Prophet has instructed his followers to train their children in such a manner that they should consider truth and straight dealing respectable things and should avoid telling lies. Had the Prophet ignored these things and had not emphatically reminded about them, then there was a danger that the children on growing up would not have considered telling lies as sin.

Adoption of straight dealing and telling the truth has been very strictly insisted upon, so much so that it has been enjoined upon to take care about this in even small household matters.

Asmaa’ bint Yazid narrates that she once asked the Messenger of Allah:

“If someone of us women stated that she had no desire to have a certain thing even though she had that desire, then would it be considered a lie?”

Not to Tell a Lie Even in a Joke

The establisher of the Shari`ah (peace be upon him) has warned of all the occasions where falsehood can be used and the adverse consequences of the same, so much so that it is not possible for even an ordinary enforcer to misguide the people about the reality or to lessen its importance.

A man tends to make false statements in cutting jokes, thinking that on the occasions of entertaining people there is nothing wrong if baseless information is given or false and imaginary events are related. But Islam, which considers providing relief to hearts as permissible, has fixed only those methods proper and permissible which are within that: limits of truth, because halal is much broader than haram and that truth is independent of falsehood. Allah’s Messenger has said:

“Death for the man who indulges in story-telling in order to make some people laugh and for that he relies on falsehood. There is death for him, there is destruction for him.” (At-Tirmidhi)

In another hadith it is stated:

“I give guarantee of a house in the middle of Paradise for the man who has given up falsehood, though he was required to indulge in humor.” (Al-Bayhaqi)

The Prophet has said:

“A believer cannot have complete faith unless he gives up falsehood in his jokes and debates though in all other matters he speaks the truth.” (Ahmad)

This is our daily observation that people give full rein to their tongues in the matter of humorous talks to make others laugh, and do not hesitate to spread the tales and stories invented by friends or foes only for the purpose of getting some pleasure or for pulling some one’s leg, when the world has absolutely prohibited such a wrong policy, and this is a fact that this kind of entertainment and amusements and false acts create enmities and rivalries,

Some peoples when they praise somebody, go to the extent of exaggerating and making false statements. For a Muslim it is necessary that when he praises somebody he should do it to the extent to which he knows about that man, he should avoid exaggeration and falsehood in showering praises of the praised one, although he may be deserving of the praises, for exaggeration is a kind of falsehood which has been forbidden,

To a person who was praising the Prophet, he said: “Do not indulge in exaggeration while praising me, as the Christians did in the case of Ibn Maryam (Christ). I am only a slave. So only say that he is a slave of Allah and His Messenger.” (Al-Bukhari)

A group of such people is always found who lick the boots of the leaders and rulers of the country and praise them to heaven. The main purpose of their lives is to compose very lengthy panegyric poems or to write long-drawn essays in praise of their benefactors.

Thus, they try to make a mountain of the molehill and place an unknown person in the palace of fame. Sometimes they do not even hesitate to call the tyrant rulers as standard bearers of justice and coward and chicken hearted soldiers as brave and lion-hearted fighters. Their only purpose in this is to earn wealth.

This is the worst kind of falsehood. Allah’s Messenger has counseled us to totally reject them and expose them till they give up their wrong practices.

Abu Hurayrah says that the Prophet has commanded us that we should throw dust in the face of those who indulge in exaggeration in their praises. (At-Tirmidhi)

The commentators have pointed out that the persons mentioned here are those who make exaggeration as their habit and through this try to earn gifts and presents from the praised ones but those persons who praise the performers of good acts with a view to encouraging them and to inciting others to follow their example are not meant.

The limits where a Muslim stops and which keep him distinct from the bootlickers and the exaggerators are: that he praises his benefactor or a good person, but he does not let him indulge in vanity and pride. These limits have been clarified by the Prophet.

Abu Bakr narrates that a man praised someone in the presence of Allah’s Messenger and the Prophet told him:

“Fie on you, you have separated the head of your companion,” He repeated these words and then said: “If someone wants to praise his brothers then if he is aware of the facts then he should say that I think he is such and such and Allah is the real Knower, and there is none purer and innocent than Allah; I consider him bearer of these qualities.” (Al-Bukhari)

The article is excerpted from the book  “Muslim Character” , an American-English translation of Muhammad Al-Ghazali’s Khuluq Al-Muslim