Charity is one of the best deeds a Muslim can do. Giving charity, we are actually giving back to Allah what He has gifted us, is a practical way of showing gratitude to Allah: 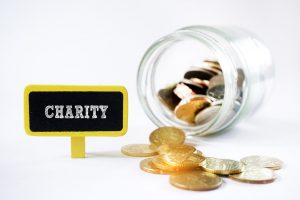 The Prophet (peace be upon him) said: “Save yourself from Hell-fire even by giving half a date-fruit in charity.”

Allah will deprive usury of all blessing, but will give increase for deeds of charity: For He loves not creatures ungrateful and wicked. (Al-Baqarah 2:276)

Narrated Asmaa’ bint Abu Bakr that she had gone to the Prophet (peace be upon him) and he said, “Do not shut your money bag; otherwise Allah too will withhold His blessings from you. Spend (in Allah’s Cause) as much as you can afford.“ (Al-Bukhari)

Several hadiths (sayings) of the Prophet Muhammad (peace be upon him) indicate the virtues, importance and rewards of spending in the way of Allah.

The Prophet (peace be upon him) said: “Save yourself from Hell-fire even by giving half a date-fruit in charity.” (Al-Bukhari)

Narrated Ibn Mas`ud: I heard the Prophet (peace be upon him) saying:

The Prophet (peace be upon him) said, “Every day two angels come down from Heaven and one of them says, ‘O Allah! Compensate every person who spends in Your Cause,’ and the other (angel) says, ‘O Allah! Destroy every miser.’” (Al-Bukhari)

A Way to Paradise

Narrated Abu Hurairah that a Bedouin came to the Prophet (peace be upon him) and said, “Tell me of such a deed that will make me enter Paradise, if I do it.” The Prophet said, “Worship Allah, and worship none along with Him, offer the (five) prescribed compulsory prayers perfectly, pay the compulsory Zakah, and fast the month of Ramadan.” The Bedouin said, “By Him, in Whose Hands my life is, I will not do more than this.” When he (the Bedouin) left, the Prophet (peace be upon him) said, “Whoever likes to see a man of Paradise, then he may look at this man.” (Al-Bukhari)

The Prophet said, “Seven people will be shaded by Allah under His shade on the day when there will be no shade except His. They are: (1) a just ruler; (2) a young man who has been brought up in the worship of Allah, (i.e. worship Allah (Alone) sincerely from his childhood), (3) a man whose heart is attached to the mosque (who offers the five compulsory congregational prayers in the mosque); (4) two persons who love each other only for Allah’s sake and they meet and part in Allah’s cause only; (5) a man who refuses the call of a charming woman of noble birth for an illegal sexual intercourse with her and says: I am afraid of Allah; (6) a person who practices charity so secretly that his left hand does not know what his right hand has given (i.e. nobody knows how much he has given in charity). (7) a person who remembers Allah in seclusion and his eyes get flooded with tears.” (Al-Bukhari)

A man came to the Prophet (peace be upon him) and asked, “O Allah’s Messenger! Which charity is the most superior in reward?” He replied, “The charity which you practice while you are healthy, niggardly and afraid of poverty and wish to become wealthy. Do not delay it to the time of approaching death and then say, ‘Give so much to such and such, and so much to such and such.’ And it has already belonged to such and such (as it is too late).” (Al-Bukhari)

The Prophet (peace be upon him) said, “The best charity is that which is practiced by a wealthy person. And start giving first to your dependents.” (Al-Bukhari)

Anas narrated that the Prophet was asked which fast was most virtuous after Ramadan? He said: “Sha`ban in honor of Ramadan” He said: “Which charity is best?” He said: “Charity in Ramadan.” (At-Tirmidhi)

Before It’s Too Late

Narrated Harithah ibn Wahab: I heard the Prophet (peace be upon him) saying,

“O people! Give in charity as a time will come upon you when a person will wander about with his object of charity and will not find anybody to accept it, and one (who will be requested to take it) will say, “If you had brought it yesterday, would have taken it, but today I am not in need of it.” (Al-Bukhari)

The Prophet (peace be upon him) said, “The Hour (Day of Judgment) will not be established till your wealth increases so much so that one will be worried, for no one will accept his Zakah and the person to whom he will give it will reply, ‘I am not in need of it.’” (Al-Bukhari)

Narrated `A’ishah (may Allah be pleased with her):

Some of the wives of the Prophet (peace be upon him) asked him, “Who amongst us will be the first to follow you (i.e. die after you)?” He said, “Whoever has the longest hand.” So they started measuring their hands with a stick and Sauda’s hand turned out to be the longest. (When Zainab bint Jahsh died first of all in the caliphate of `Umar), we came to know that the long hand was a symbol of practicing charity, so she was the first to follow the Prophet and she used to love to practice charity. (Sauda died later in the caliphate of Mu`awiyah).

No charity is accepted from what is grabbed from an illegal way.

Narrated Abu Hurairah that Allah’s Messenger (peace be upon him) said:

It was narrated from Salman bin `Amir that the Prophet said:

“Giving charity to a poor person is charity, and (giving) to a relative is two things, charity and upholding the ties of kinship.” (An-Nasa’i)

Narrated Zainab (the daughter of Um Salamah): My mother said, “O Allah’s Messenger! Shall I receive a reward if I spend for the sustenance of Abu Salama’s offspring, and in fact they are also my sons?” The Prophet replied, “Spend on them and you will get a reward for what you spend on them.” (Al-Bukhari)

The Prophet (peace be upon him) said:

“Every Muslim has to give in charity.” The people asked, “O Allah’s Prophet! If someone has nothing to give, what will he do?” He said, “He should work with his hands and benefit himself and also give in charity (from what he earns).” The people further asked, “If he cannot find even that?” He replied, “He should help the needy who appeal for help.” Then the people asked, “If he cannot do that?” He replied, “Then he should perform good deeds and keep away from evil deeds and this will be regarded as charitable deeds.” (Al-Bukhari)

Abu Dharr narrated that the Messenger of Allah (peace be upon him) said :

Abu Hurairah reported that Messenger of Allah (peace be upon him) said,

“On every joint of man, there is charity, on every day when the sun rises: doing justice between two men is charity, and assisting a man to ride an animal or to load his luggage on it is charity; and a good word is charity, every step which one takes towards (the mosque for) Salah is charity, and removing harmful things from the way is charity”. (Al-Bukhari and Muslim)

Even the Duha (fore-noon) Prayer is a charity. It is recommended to pray Duha, the least of which is two rak`ah, the best of which is eight, and the average of which is four or six, and encouragement to do so regularly

Abu Dharr reported Allah’s Apostle (peace be upon him) as saying: